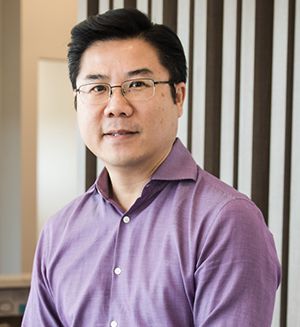 Dr. Lin grew up in the Napa Valley, he attended high school in Pacific Union College Preparatory School and attended college in the Pacific Union College. He graduated with a Bachelor's degree in Biochemistry and a minor in Art. He enjoyed classes such as life sketching, illustration, acrylic painting, pottery, and graphic design. Dr. Lin also met Mrs. Lin in college. They married in 2002.

In 2008, Dr. Lin graduated in honors with a degree in Doctor of Dental Surgery from the Loma Linda University School of Dentistry in Southern California. He was also elected as a member of the Omicron Kappa Upsilon Dental Honors Society.

While he had set to search for a private practice, he knew he would like to be back in beautiful Northern California. Dr. Lin began to practice as an associate dentist in Santa Rosa. He found his "perfect practice" in Woodland and settled there in 2011. Dr. Lin enjoys caring for the dental health of his patients, and he is continually keeping up with the latest dental information and technologies. Since 2011, Dr. Lin had introduced digital radiology and CAD/CAM technology into his practice. A recent addition to the practice is 3D digital imaging.

Dr. Lin is currently in the process of building a state-of-the-art practice in Woodland to provide current and future patients with modern dentistry.

Dr. Lin and his wife have an eight-year-old daughter and a five-year-old son. He enjoys spending his time with his young family. When Dr. Lin is free, he enjoys playing tennis, golf, cycling, and skiing. He also has a love for classic air-cooled cars such as Porsches, VWs and Fiats, and you might even see his ’66 VW single cab at the Woodland Street Cruisers this May 2017.

Dr. Lin also likes to stay involved in the community and has been a proud sponsor of Yolo Brewfest for the past five years, this year benefiting the SquareOne Project at the Woodland Public Library. Dr. Lin also loves the arts and has been able to sponsor some production for the Woodland Opera House the past two years. Dr. Lin is also a member of the Noon Rotary Club in Woodland.

Thank you for Submitting your request. Our Office will get back to you.